"They are quite pleasant underfoot, aren't they?"
―Victory Mine Vortigaunt[src]

Antlion Grubs are the larval forms of Antlions. They are found in the first two chapters of Half-Life 2: Episode Two, To the White Forest and This Vortal Coil, in the Victory Mine.

The Grubs resemble Earthly insect larvae, with soft, translucent bodies and underdeveloped limbs. They also have small mouths that open and close slowly. They emit a high chirping call and bioluminescence similar to that of a Firefly. They are found only deep inside Antlion colonies, and can be seen hanging on any available surfaces, often in groups of two or more. They are extremely fragile and can be killed by merely bumping into them. In the hive, human remains are sometimes found scattered on the ground near Grubs, suggesting that they are carnivorous and are presumably provided with food by mature Antlions. Grubs also exude a filmy thread, similar to that of a Silkworm but on a much larger scale. As seen in the Victory Mine, these webs often block whole passageways or contain items useful to the player. Every Antlion in the nest will protect grubs fiercely.

Grubs internally contain a yellow substance with healing properties, named 'larval pellet' ('nugget' in the game files). Killing the Grub releases the said larval pellet, which varies in size (it includes three models: small, medium, and large). How much the substance heals is dependent upon the player's current health level.[1] The larval pellet will be destroyed if it hits the ground at relatively high speed or if it is shot.

As seen in Half-Life: Alyx, it appears that the Combine utilize the aforementioned larval pellets to produce their healthkits and healthvials by liquifying the contained grub, thereby extracting the pellets from the grub. 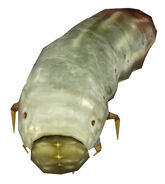 The original (squashed) Antlion Grub model. Of note is the sentence written on the creature's belly: "If you can read this, you're looking at grub bung!", with "bung!" between two asterisks.

The original Antlion Grubs in the map "antcave". 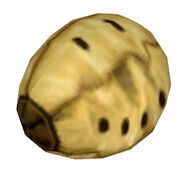 Beta screenshot of Grubs in the Victory Mine. 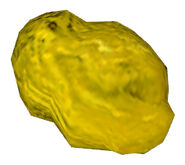 Grubs in the Victory Mine.

Antlion Grub hanging on a web.

One of the "Piñata Party" webs. 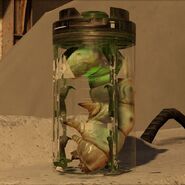 Grub in a Health Station vial.

The vial plugged into a Health Station.

This video contains all the animations of the Antlion Grubs.

There are only a few animations made for this creature.

Note that only the animations made for Half-Life 2: Episode Two are in the video.