"Keep it clean... or he will"
―Combine propaganda poster[src]

The Cremator,[1] also known as the Combine Janitor, is a passive enemy cut from both Half-Life 2 and Half-Life: Alyx. The Cremator is mainly known as "A Combine janitor of sorts", and was originally intended to remove corpses from the city streets by burning them, clean up Wasteland trains coming into the city from any wildlife that might have held on to it during the journey by exterminating them,[1] and patrol some parts of the Wasteland, such as train Depots.[2] It was also apparently supposed to occasionally fight the player. The Cremator is somewhat notable as it was an enemy the developers were very attached to, to the point that references to it remain in the final game and the idea of re-introducing it into the canon Half-Life universe was toyed with during development on Half-Life: Alyx almost twenty years later.

Several WC mappack maps, such as "cremator_street02.vmf" or "cremator_039.vmf," feature areas of the American-like City 17 of the first concepts where some Cremator tests were conducted by the development team.

The map "cremator_street02.vmf" involves a run-down area in fire with two Cremators, while "cremator_039.vmf" involves a normal area with Cremator squads protected by Metrocops and a brick tunnel filled with wrecked cars, Manhacks and Ceiling Turrets, all attacking the player.

Another map, "wasteland_depot.vmf", last edited August 2001 and set in the Wasteland, features an early Depot with, among other things, a Cremator waiting for the player on the train platform. Another Wasteland map, "toxic_pit03.vmf", last edited June 2001, consists of a small valley filled with Headcrabs, and several Cremators stationed above.[2]

The Cremator was cut as an enemy from the retail version of Half-Life 2, but as an Easter egg in Eli Vance's lab at Black Mesa East there is a Cremator's head apparently preserved in formaldehyde (methanal) on the table located to the right of the teleport. Eli mentions that Alyx brought it in, stating "We're still not sure what that does. Alyx brings in the strangest things". A nearby computer screen with some sort of scan of the Cremator head on it also suggests it is studied by Eli or someone else (it is also featured in the Half-Life 2: Deathmatch map "dm_steamlab"). This object is missing from earlier previews of the Eli's Lab sequence, suggesting it was added late in development, after the Cremator was cut.

An updated version of the Cremator was planned to appear early on in the development of Half-Life: Alyx, once again to be used to clean-up Xen fauna that occupied City 17. The concept of Xen wildlife taking over the city was used in the Quarantine Zone, but the Cremator was cut from the final game and its role was given to the Combine Hazmat Workers – however, these are never encountered alive in-game, instead only appearing as zombies or corpses.[4] 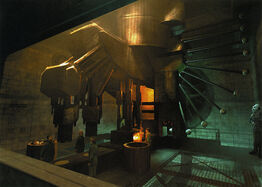 The Cremator's right hand, with the orange sphere.

The Cremator Factory in the WC mappack.

Closeup of a Cremator in the map "toxic_pit03".

The Cremator shooting at Gordon Freeman.