Half-Life Wiki
Register
Don't have an account?
Sign In
Advertisement
in: Stubs, Articles to be Wikified, Zombies,
and 4 more

View source
watch 02:30
Dead Cells Final DLC - The Loop
Do you like this video?
Play Sound

Electric Zombie is a enemy featured in Half-Life: Alyx. It is the result of a Reviver crawling into the chest cavity of a deceased Headcrab Zombie. The result is a reanimated and controlled corpse.

Electric Zombies are corpses of zombies that have been revived and controlled by a Reviver. This happens when a Reviver crawls into the opened chest cavity and releases electricity, turning lifeless corpses into deadly meat puppets. Electric Zombies' appearance are the same as their Headcrab counterpart except their head, because there aren't Headcrabs on their head anymore. However, Electric Zombies are noticably different from Headcrab Zombies because Revivers will move around zombies' bodies, making it hard for the player to aim.

Electrified zombies can attack the player by ejecting a highly conductive "string" to connect them to their target, allowing an electrical charge to quickly and efficiently incapacitate their foe. While it charges electricity, the zombies will raise their hands and strike the floor. When the zombie is damaged enough, the Reviver will abandon its host before desperately lunging at its attacker. Another way to kill it is attacking the Reviver quickly while it is climbing inside the zombie, which is harder to achieve. 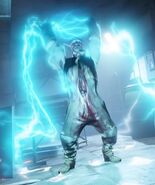