Instead of the Gravity Gun, the main gameplay element is the "Russells," or rather the Gravity Gloves (code-named the "Grabbity Gloves" during development) which allow Alyx to yank objects within a certain range towards her, and was likely implemented due to the difficulties of bending over in VR. The in-game world is fully interactive, allowing players to pick up objects and depending on the capabilities of their controllers interact with these objects in different ways. Combat takes advantage of the VR environment: players are required to manually reload guns, and can perform tasks while still engaging in active combat.

Nonetheless, the Valve Index sold out in the United States, Canada, and Europe within a week of the game's announcement, and by mid-January 2020 it was completely sold out in all 31 regions the unit is offered. The announcement of the title also had a profound sales effect on VR headsets as a whole, back-ordering all SteamVR-compatible headsets for months, spanning well-past Alyx's release date in some regions. As of a week past Alyx's release date, VR headset prices were still at an all time high due to lack of supply and the heightened demand.The extreme demand for VR headsets was most likely a product of the game's very positive reception among players and fans of the series, combined with the effects of the COVID-19 pandemic on manufacturing. 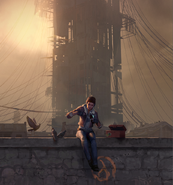 Ditto, Steam variant.
Add a photo to this gallery

Combine units in a raid.

Zombie between the rubble.

Alyx is looking at a Puzzle-theme sewer area.

Alyx is battling with a group of Combine, holding an upgraded Alyx's Gun.

The G-Man.
Add a photo to this gallery

The Half-Life Wiki has more images related to Half-Life: Alyx.

Retrieved from "https://half-life.fandom.com/wiki/Half-Life:_Alyx?oldid=318092"
Community content is available under CC-BY-SA unless otherwise noted.