Half-Life Wiki
Register
Don't have an account?
Sign In
Advertisement
in: Articles for clean up, Factions, Enemies,
and 3 more
English

View source
watch 02:52
Roblox: DeepWoken - The Loop
Do you like this video?
Play Sound

"So much for the government. It's Hell out there! Completely under military control!"
―Black Mesa Scientist[src]

The Hazardous Environment Combat Unit, abbreviated as HECU, is a United States Marine Corps Special Forces Unit that is featured prominently in Half-Life and its expansions. Specially trained, they deal with a variety of indoor combat situations, particularly involving a dangerous environment and unconventional enemies.

The Marines of the HECU are specially trained to deal with a variety of indoor combat situations, particularly involving a dangerous environment and unconventional enemies. The HECU are part of a "dangerous and very efficient clean-up crew", and are supposed to work in concert with the Black Ops and the Black Mesa Security Force.[5]

In the Half-Life Audio Script, the HECU Marines are described as follows:

Human military units sent in to "clean up" the base following the disaster. It is their job to execute anyone with knowledge of the research project that went awry. The more you know about the project, the more they want to kill you. They especially hate you, Gordon Freeman, personally - because you have cut down quite a few of their buddies.[6]

They are featured in Half-Life, and its expansion packs, Opposing Force, Blue Shift, and Decay.

Following the catastrophic Resonance Cascade at the Black Mesa Research Facility, bizarre aliens from Xen teleport into the complex and begin attacking personnel. The Hazardous Environment Combat Unit is dispatched to the facility to fight the aliens and regain control of Black Mesa. Unknown to the surviving personnel at Black Mesa, though, the Marines have also been ordered to eliminate Black Mesa's civilian personnel to ensure that the incident is covered up. The HECU rapidly takes over the surface areas of Black Mesa using their V-22 Ospreys to drop in men and then dispatches forces into the interior to eliminate the aliens, Black Mesa Security Force, and bring important members of the Science Team up to the surface for brutal interrogation. Many Marines disagreed with their orders.

The HECU's initial foray into Black Mesa was highly successful: the Marines quickly gained an advantage over the confused and frightened survivors and aliens and established a substantial presence within the facility. Black Mesa's civilian personnel failed to put up any notable resistance, as many personnel mistakenly believed that the Marines were there to rescue them, and those who tried to defend the facility against the HECU were hopelessly outgunned and overwhelmingly outnumbered, having already been weakened by the Xen creatures. The HECU soon took control of Black Mesa's central command areas and issued orders over the public address system for the facility's remaining personnel to cooperate and submit to interrogation. The troops began fortifying key surface areas with sandbags, mounted machine guns, and fixed artillery. Although there were few of them, there were also some snipers, one of which shot at and fatally wounded a security guard.

The tide soon turned against the HECU, though, as the Xen aliens continued teleporting into Black Mesa in overwhelming numbers. Surviving facility personnel lent their help to Dr. Gordon Freeman, who was able to sneak and fight his way across the facility despite all the HECU's actions, being responsible for many casualties on their side. Freeman quickly became a priority target of the troops. Their anger toward him was exemplified by several sets of graffiti seen in the "On A Rail" chapter of the game, which read "YORE DEAD FREEMAN" [sic], "SURRENDER FREEMEN" [sic], "DIE, FREEMAN", the latter of which is accompanied by 1 or 2 tripmines. Also in the same chapter two Marines can be heard talking about Freeman and their proposed revenge for killing so many of their friends, ignoring the irony of what they themselves had been doing. Their conversation also hints that the Marines mistakenly believe Freeman (and by extension, the whole Black Mesa Science Team) intended to cause the Resonance Cascade.

The full conversation is as follows:

As the battle raged on, the Xen aliens began to gain the advantage and the HECU, which was sustaining appalling casualties, was evacuated as aerial bombardments tore into the facility. The evacuation was woefully incomplete, however, leaving many Marines behind in the facility (in blatant violation of the policy to never leave another Marine behind) in the unenviable position of being caught amongst the forces of the Black Ops, the Xen aliens, the newly-arrived Race X creatures, and a still active Freeman.

Still, the HECU was aware of this happening to some degree, as a soldier was able to send one last radio transmission to any stragglers left underground.

During Gordon Freeman's run to the satellite array and the later return trip, Gordon makes his way through a HECU camp in the shipping yards which consists of multiple weapon emplacements, troops in towers, a command tent, and a pit dug for burning dead Vortigaunts.

In the original Half-Life game, the Hazardous Environment Combat Unit was simply referred to as "the military" or "soldiers". In the expansion Opposing Force, the protagonist, Corporal Adrian Shephard, is one of those men, and during the opening titles that display his personal info, his training is listed as "USMC Special Forces" and his current assignment is listed as the "Hazardous Environment Combat Unit, Santego Military Base, Arizona". Many new models are included, notably two precise classes: the Engineer, assigned to cut open sealed doors using a welding torch, and the Medic.

Opposing Force takes place several hours after the initial resonance cascade. Adrian Shephard is knocked unconscious when his Osprey transport is shot down by Xen forces and wakes up several hours later in the Black Mesa Infirmary. Shephard regains consciousness just in time to witness the HECU begin to pull out all of its troops. However, he is prevented from leaving when the mysterious G-Man seals him in the facility. Shephard is forced to continue deeper into Black Mesa, where he encounters and takes charge of the remnants of HECU who have also been left behind during the evacuation. Shephard and his men find themselves combating not only the aliens from Xen but also the newly arrived "Race X" aliens and a group of government Black Ops assassins who have recently been dispatched to the facility, who appear to have orders to eliminate any remaining HECU Marines as well as to destroy Black Mesa with a nuclear device.

Furthermore, in both games, the troops are deployed in Osprey aircraft, which at the time of the game's production, had not yet gone beyond Engineering and Manufacturing Development (EMD) and low-rate production with the United States Marine Corps.

These actual Murphy's laws are included in the Opposing Force instruction manual, written as a soldier's handbook.

In Blue Shift, the HECU is first seen in the chapter Duty Calls, where two soldiers are seen dumping security guard corpses above Sector G's Drainage Canal. They are prominently seen in the next chapter, Captive Freight, where they are swarming the Freight Yard, have trapped Rosenberg and many other scientists in containers, and fatally wounded Harold. In the next chapters, Power Struggle and A Leap of Faith, set in and under the Section A-17 Prototype Labs, they do everything they can to stop Barney, Rosenberg, Simmons, and Walter from escaping the facility by teleportation, but they ultimately fail.

In Decay, the HECU is first seen in the Level 3 Dormitories, during the chapter Domestic Violence. A dying security guard warns the players that they are everywhere. Gina and Colette continue through the level, seeing the aftermath of the HECU's invasion. They eventually get to the Library, which they have to clean up from the soldiers so that they can bring a security guard to Dr. Keller. The HECU is seen in the next chapter, Code Green, in the Black Mesa Air Control. There many are offloaded by an Osprey and attack Gina and Colette while they attempt to enter the clearance codes given by the security guard picked up in the Level 3 Dormitories. They are seen again in the next chapter, Crossfire, in the sewers under the Gamma Labs, where they guard the Displacement Beacon Focus Emitter. They are finally seen in the bonus chapter, Xen Attacks, in the underground parking lot located under the Ordinance Storage Facility where R-4913 and X-8973 must retrieve the Xen crystal samples. 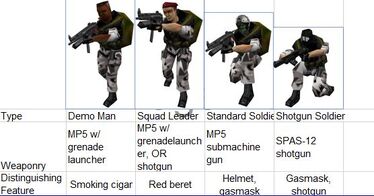 Each HECU marine is equipped with urban camouflage battle dress uniform (BDU), a powered combat vest (PCV), and can be equipped with either a PASGT helmet and/or an M40 gas mask. The HECU marines carry different weaponry based off their character model:

The HECU marines use a wide variety of weapons for various purposes. Most of these weapons are based on real-life weapons. S

Some of the below weaponry cannot be used by the player, and are marked with an asterisk*

The HECU marines use the following ground and air vessels:

The HECU marines use the following pieces of technology to carry out their mission:

If the HECU are occupied with fighting other forces (such as Xen aliens), the player can place a Satchel Charge amidst the marines while they are not paying attention. A well placed satchel charge can save the player time and health in fighting the marines directly.

The HECU use vehicles to kill or distract the player in later levels, and it is often best to take out the infantry first so the player can then focus on taking out the vehicles.

In some levels, the HECU will also use snipers to cover an area. The snipers can be deadly if the player is caught off guard or ventures into the open area unaware of the sniper's presence.

The HECU are also prone to laying Laser Tripmines and sentry guns in unsuspecting places, especially around blind corners and cramped areas, so the player should be wary of both of these, as it is very easy to fall into these traps.

At close to medium ranges, using the shotgun and SMG on HECU troops is also very helpful, as the soldiers use these weapons themselves and will drop valuable ammo. While at longer ranges, using the pistol can be helpful as well due to soldiers' poor accuracy at longer ranges, and the ammo for this weapon is shared with their SMG as well. Soldiers will also melee attacks, kicking the player if they get too close. However, if they're attacked while performing melee attacks they will either hesitate for a few seconds before kicking again, retreat, or open fire at point blank.

Plan for the Half-Life chapter Surface Tension, with the HECU camp.

Beta image of HECU soldiers beating up a scientist.

HECU soldiers and MP security guard in the same place.

Demonstration of HECU AI. The lines on the floor possibly show the paths of movement and covering, the slightly pitched line is looking, and the polygonal chain is the trajectory of M203 grenade launch and ricochet (grenades were originally timed).

Cave to the following HECU location.

Another view of the same place.

View of the canyon from the cliff where a HECU soldier is waiting for Freeman.

An Engineer and another soldier who have been left behind like Shephard.

A dying HECU soldier warns Shephard about what awaits him in the underground parking near a M35 cargo truck crushed by a blast door.

All HECU classes assembled into a team.