Half-Life Wiki
Register
Don't have an account?
Sign In
Advertisement
in: Articles for clean up, Articles containing spoilers, Portal 2, DLC

The Perpetual Testing Initiative is a level editing and sharing service for Portal 2, released by Valve on May 8th, 2012. It is free for all who purchase Portal 2, and is included directly in the game. Users can create levels, play them, and also share them online for other players to play. The level editor features a simple interface, and the ability to test play the level.

The Perpetual Testing Initiative is a project administrated by Cave Johnson in the late 1960s as Aperture Science becomes bankrupt. Johnson promotes that the Multiverse Theory exists and that there are infinite universes with infinite Aperture Science facilities. The layout of the project is to trick the more financially-stable versions of Aperture by planting blueprints of test chambers on the desks of unaware associates of alternate universes and stealing the chambers when they are constructed. Johnson admits that the project was indeed a con plan, and that they are robbing the more-stable versions of themselves to produce more test chambers. He succeeds in the project which makes Aperture the first science facility to explore the multiverse.

It is believed that the project takes place around the same time that Black Mesa starts planning the project that will lead to the Combine Invasion. This is based off a quote that an alternate Cave makes when his Aperture buys out their Black Mesa and shuts down said project, preventing the entire Half-Life storyline from happening.

However, the universe of the primary Cave Johnson is not the same as the one from Portal 2; the universe deviates when a world is visited where Cave uploaded his mind into a computer and became insane, and this prompts the 'original' Cave to cancel the Genetic Lifeform and Disk Operating System initiative.

Near the end of the storyline the original Cave teams up with an alternate version of himself known as "Dark Cave" (who is running a similar con) to find the "money-verse," a universe where the earth is made entirely of U.S. currency. He eventually succeeds and testing is continued on the primary earth.

These are some of the universes visited during the course of the tests:

The Perpetual Testing Initiative has a story-based plot, and is the third DLC of Portal 2. Players are allowed to use a new in-game map editor that is shown as a blueprint of a test chamber. The test chamber is then compiled through the Source engine and then rendered as an actual map. The test subjects you play as in the game have the look of the simple human figure, seen in trailers for the Portal games. Players can then upload their creations by using the Steam Workshop, where other players can download and play test chambers freely. This map editor is only available to both PC and Mac versions of Portal 2. 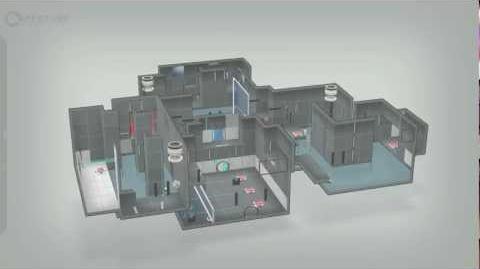