Half-Life 3 will appear at Gamescom, according to a PDF list of videogames found on the show's website. T3 Online was the first to spot the inclusion of Half-Life 3 on the list, the game being the only one to be revealed by Valve at the show. The PDF clearly states Half-Life 3 but Gamescom's list does not that it takes 'no responsibility' for the accuracy of the information of the information, admitting that it is gathered from forums and blogs. Still a slightly odd stance from an official show. TechRadar spoke to Mike Sawh, the journalist that spotted the inclusion, who said about the find: "I was simply searching around for assets on the official Gamescom website in preparation for T3's coverage of the gaming expo, and spotted the list of announcements in a PDF, and there between Ubisoft and Warner Bros was a single listing for Half-Life 3. "If it's true, this could be without doubt the biggest announcement of Gamescom by some margin." 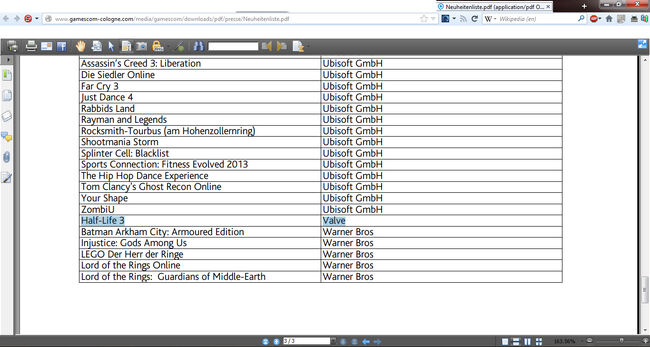 So what do you think? Is this another empty tease or could this be the moment we've all been waiting for? Leave your thoughts below!

Update: Valve's VP of marketing Doug Lombardi told Lambda Generation in July, "We will have the Steam team there to meet with developers and publishers. No game showing planned."

Update 2: Gamescom organizers characterized the listings for both Half-Life 3 and Dragon Age 3 as "a mistake," but wouldn't explain to Eurogamer why the listings appeared. The plot thickens!

Update 3: Valve rep Doug Lombardi reconfirmed that, "We are not showing any games in Cologne this year."

Update 4: Gamescom's organizers have said, "We can not officially announce it. Please check our list for further changes. Please see the legend for information about the sources."

On top of all of this, we get a trailer showing the Half-Life 3 Logo that randomly shows up on the same day we see Half-Life 3 appear on gamescon's official .pdf listing. Coincidence? I think not! 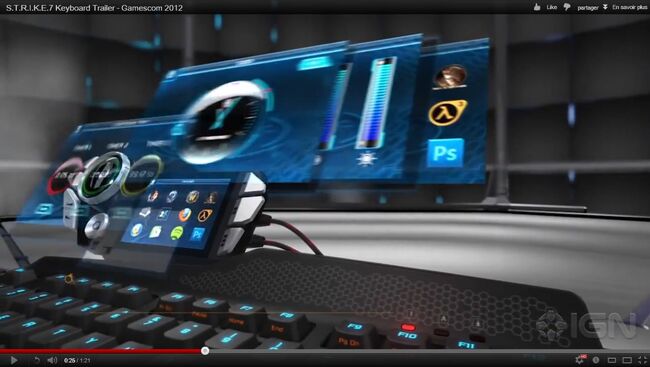 MAJOR UPDATE
At this point, I can almost assure anyone reading this that this is in fact, an ARG [Alternate Reality Game]. So on the official Valve Left 4 Dead blog, there's a link to TF2's Mann Vs Machine page. The interesting thing is that the link that actually appears on the screen is typed as www.teamf6rtress.com/mvm/ which redirects to a fake steam profile that shows someone playing Half-life 3. If this isn't an ARG, then Gordon Freeman is a nuclear fish. Feel free to dig deeper and see if you can find anything!!

Screncap of the Fake steam profile

Update There are even more things to note. If one presses the "View stats" link on the "Half-Life 3: Indev" game, the entire site, including the Steam logo, will begin to jumble and fall to the bottom of the page. 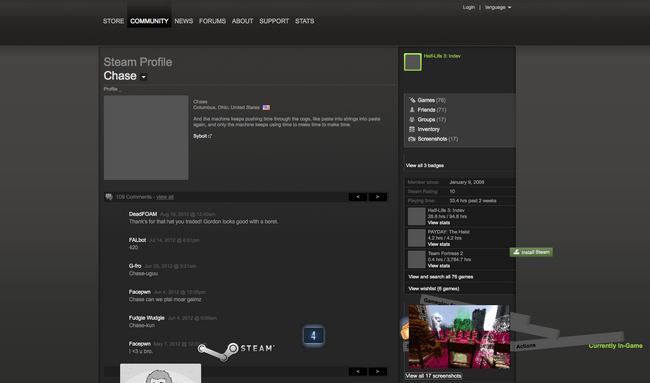 Reddit's r/gaming has noticed that the actual profile seen is located at http://steamcommunity.com/id/mcmanning where Garry's Mod is in place of the "Half-Life 3: Indev" previously found. The profile belongs to a software developer, Chase McManning. At his twitter, McManning's latest tweet states "Hey, 1273550, Monday.".

As pointed out by another user on Reddit, 1273550 corresponds with the AppID of the Steam Store. This tweet also possibly sets a date for an announcement on Monday.

At the bottom of the fake profile, some added words can be found in the Valve disclaimer.

"This is a clever disclaimer claiming that this is a parody, and makes no real attempt at spoofing the Steam Community. Spare me, Valve. I am but a humble gamer. I wish not to suffer the horrors of Origin."

Valve is either in full swing of an ARG, or software developer Chase McManning is pulling a trick on fans of the Half-Life series.

Update
So after all of information that's flooded out for the last three days, much to our 'surprise' a good portion of everything seems to have been a coincidence. Another chance of getting HL3 is gone. All we officially got out of gabe was:

You wont get Half-Life 3 if you eat me.

Well. As someone who has been obsessed with the series since 2001, I think I speak on behalf of everyone when I say, DON'T EAT GABE. Seriously though, I really wish we did get to have some sort of reassurance from the company that we all love, that the game Is going to come sooner rather than later.